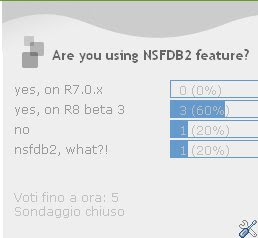 Just a few voters participated to the poll and the majority of them reached my blog just because they where probing for "nsfdb2" tag.

Anyway, I would like to share the results with you, before I remove the poll from the page, just for the sake of discussion...

I'm sure nsfdb2 will be more popular in the (near) future, the community will appreciate that new technology.

IBM seems focused on releasing nsfdb2 at the sametime of R8: I hope that is true, delays are not welcome anymore.

In my opinion, there are two general reactions about nsfdb2:

a) the majority of Notes community:
"I don't know exactly what nsfdb2 is, I've heard something about it before R7 release, but then no more...Is it still alive?! "

b) just a few "brave" people:
"I know what it is and I'm experimenting with it, but IBM still has not released nsfdb2 yet!"

I'm confident nsfdb2 will find its way, there are several cases that are suitable for it.

Are you confident too, or will IBM postpone nsfdb2 release AFTER the R8 release?

a few comments.
1) we NEVER delayed the release of nsfdb2. Since the first day we spoke about this feature we told loud and clear that in Domino 7 it would not be generally supported, but would have been in Domino 8.
Though I can understand your frustration for the disappearing of nsfdb2 in the iSeries space, this should not lead you to accusing IBM of having "delayed" a feature when this is NOT TRUE.
2) Let me disagree with your point a). At every event about Notes/Domino we spoke about nsfdb2, so I do not think the vast majority of our customers don't know about this. The fact only "a few brave" are experimenting with this does not mean everyone else ignores it. Most of our customers simply do not "experiment", period.
Again, your last question is too provocative, in my opinion.

@ Roberto:
re:1)
I agree with you, no official statements for R7, many whisperings in lobbies ;-)

Yes, I'm frustrated because the beta testing with nsfdb2 on iSeries was decided after a phone meeting with IBM Rochester folks and documents signed by my customer to get into the beta program: we even did not received any e-mail by IBM when the iSeries program was closed (there was even the very same nsfdb2 web page on iSeries site). Rob Ingram, Domino product manager, said: "I'm sure we always have room to improve partner communication". Sure, I agree with him.

re:2)
Roberto, do you really think the majority of customers knows what nsfdb2 really is? sorry, unfortunately that's not my feedback with customers and colleagues, of course I may be wrong.

Last questions is not provocative, it's a wishful statement: the "next major release" is coming, eventually, and we are all happy about it, don't we?
I'm sure IBM engineers are working hard on nsfdb2 for R8 release, we wish them a good work.

Thanks for your feedback, Roberto.

1) Another point of view, by Volker Weber
Still waiting for NSFDB2?

2) Strange enough, after successfully contacting some key people in IBM, no answer to my technical post:
how to set SQL Query statement to a QV via LS code ?

Strange enough, after successfully contacting some key people in IBM, no answer to my technical post:
how to set SQL Query statement to a QV via LS code ?

Dear Roberto,
as for this page, coming from the IBM website, it seems that one of the new functionality of Domino 7 was "...Option to use IBM DB2 software as an alternative to Lotus Notes storage facility (NSF) for data storage..."

Usually I do not answer to anonymous, but for once I will make an exception.
The page you are linking to is a generic descriptive page of the product and can't dig into details.
Have you noticed that is written also : "Native support for Web services -- can help you easily extend and integrate....." ? Would you then use this to complain that is false since in R7 we did only act as Web services provider and not also consumer ?
I do not know you (you do not help....) but I wonder if you really would invest your time and money, started to do testing of a feature based only on a descriptive web page. I hope you don't... and I hope it for you.
Cristian did the right thing, he asked for detailed info then started testing. What came out with D8, we all know, but this is not the point now. What I am saying is that you can't honestly affirm we "promised" DB2 support in D7 then "delayed".
This is nothing personal between me and Cristian, this is business and business requires honesty (even intellectual honesty) on both sides. I appreciated Cristian to acknowledge my point in his first response.
RoB