No baloney, please... (reloaded in English)


Some of my friends were surprised when they knew that the name of my blog is DominoBaloney...

Ok for the word "Domino", but what does the word "Baloney" mean? Is it English or a fancy word? Continue reading this funny story!

I live in a town called Bologna, which is very famous for all Italian people, especially for those people living in central-southern Italy.

People in Bologna are nice, they like good food, have strong civic pride, moreover the oldest university in the world is located here (really, more then 500 YEARS OLD!).

That's why I'm proud to live in Bologna!

I was introduced to some Gilbert's friend and they begin asking me:

Gil's friends- "Where are you from?"

Cristian- "Bologna!" - I was thinking about ragù=spaghetti Bolognese, university, etc...
and some of those people began a loud laugh :-(

I asked my friend Gilbert the reason for those laughs...

Gil- "No offence... In America "Baloney" word means "Bologna" or "mortadella sausage", that is "a large smoked sausage made chiefly of bacon, veal, and pork suet" (in Italy we simply call it "mortadella")

Gosh!It was funny because my answer, Bologna, was translated to Baloney, so my answer could be changed to: "Hello guys, I come from the town of baloneys" ;-)

Actually the company I work for is located near a company named Alcisa, a very famous Italian company that produces a well-known mortadella sausage (brand "Bologna") ;-)
To remember that funny story, giving honor to the town who hosts me, and also tryning not to be too serious, I've decided to name this blog DominoBaloney. 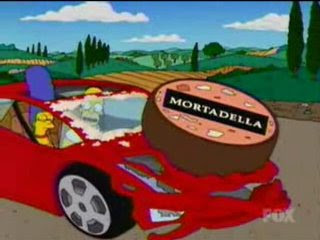 The Simpsons, episode "The Italian Bob"

And being English, I had a similar thought regarding the title of your blog... "Domino Nonsense" wouldn't be a bad blog title!

The double meaning for you is cool!

Thanks Simon for your feedback!

The Urban Dictionary link is cool too.

I hope that writing in my blog will help me to improve my English skill too ;-)

I wish I had more than just English skills - and the English speakers from the UK will probably argue that my skills aren't even proper!

Just wanted to say that was a good story and a great blog name.