Waiting for Godot (aka nsfdb2)

Everyone in the IBM/Lotus community is waiting for the NSFDB2 feature. 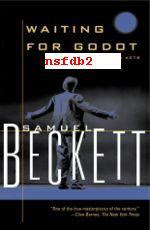 Since Domino R7, IBM marketing dept. people were talking about the the amazing nsfdb2 feature soon to be released!
I was/am thrilled about that, like a child:
how to translate a not-relational data structure (NSF) into a relational DB (db2)?
It seemed like a miracle (we all know that IBM technical people are very smart).

Ok, you can "play" with nsfdb2, but no garantuee for any production environment.
Many articles have been published on the Internet and on tech magazines (eg TheView) describing such a new data storage for Domino.

Then it was the time of nsfdb2 for Domino on AS/400 = iSeries, beginning a beta/experiment since May 2006: everyone was thrilled, me too, IBM marketing people too... ;-)

I was lucky enough working for a customer who decided to invest time and money on that brand-new technology on his iSeries (he even thought to increase iSeries performance or change the hardware).
People in IBM are very kind, giving me assistance on the nsfdb2 on iSeries, but suddenly I received the bad news! :
"Thank you for participating in the iSeries nsfdb2-beta, but now the test is closed!"
I asked some info about it: "Sorry, there are no plans for nsfdb2 on Domino R8 for iSeries.."
I was disappointed, my customer was angry and disappointed (he really loves iSeries technology).

After some postings in R8 beta forum, we decided to develop a new architecture, using Domino R8 beta 3 on Windows, and joining remote iSeries tables with DAV data from Domino, using a technique called federation: after some testing and some help from an IBM db2 guru, we did it!

But now I'm a little bit "scared" because Rob Ingram from IBM stated in this post's remarks (see nsfdb2 FAQ at
http://www.dominoblog.com/dominoblog/dblog.nsf/dx/faq-on-db2-integration ) that my workaround is "not something we can confirm works but it may be possible".
It may be possible? Maybe I'm wrong, but I think it is also a concern for IBM to find a supported workaround for people/partners who invested in nsfdb2 beta for Domino 7.0.1 on iSeries....
Was it just a way to probe customers interest in nsfdb2 for the iSeries environment? It's not nice feeling like a lab mouse ;-)

Anyhow, I'm confident nsfdb2 will be better supported on Domino R8 for Windows, even though some iSeries zombies still scream from the darkness asking revenge ;-)
I even think I love to think IBM will be commited in releasing nsfdb2 for Domino on Windows.

I give you my 2 cents about the whole nsfdb2 story:
- a new technology should be tested in the labs before any press release: I know, it's a competive world, but waiting too long to release a technology is counterproductive, in my opinion.

- IBM should make a bigger effort to support biz partners who are testing new technologies:
unfortunately that is not always true... At least I would like to receive an alpha-tester t-shirt ;-)

- in IBM public forums, IBM employees (both executives and technical people) should always put a signature at the end of their posts stating their role in IBM company:
I expect to get valuable info from people inside IBM, but I don't always know who-is-who in IBM (product manager, support group, freelance, etc);

- that's sounds obvious: IBM executives should always give clear and prompt answers to partners questions about product/strategies: their decisions will influence our decision/investments too. For me it simply means respect among partners.

Sorry if this post seems a little bitter, it is just my feedback and personal opinion.
I hope everyone will understand my point of view, no hard feelings with anyone in IBM ;-)


What are your opinions about this subject?

Volker give his "2 cents" about nsfdb2 on his blog:

My posting about your solution was intended as a statement that IBM has not been able to test the federated iSeries configuation in our labs.

I applaud your efforts and am interested to learn more of your results. Customers and partners have always discovered novel things they can do with Notes applications have and stretched its boundaries beyond anything IBM would ever test in a lab environment.

As for the DB2NSF feature in iSeries, this plan is simply the result of a tradeoff of doing other major work on the iSeries platform for the core NSF database in Domino Next that, on balance, should deliver real value to every Domnino customer.

Every decission we make every day in the Notes and Domino team involves these types of tough tradeoffs. Not every decision we make will please every customer and partner, but we do strive to address the needs of the majority of our installed base.

We are also steadily improving our communictaion of these types of plans via our various devepment run blogs. I'm sure we always have room to improve partner communication.

Rob,
thanks for your kind reply.

That's the kind of feedback / relationship I expect from IBM.

The worst thing for me as a Business Partner is to undergo decisions with no explanations at all, after months of hard work I made on the nsfdb2 technology on i5.

That's not fair, especially for my paying customers who are "first-enthusiastic adopters".

Anyway, now I'm testing nsfdb2 on Domino for Windows, and I like it.

Unfortunately there are still some undocumented features in nsfdb2 (eg http://www-10.lotus.com/ldd/nd8forum.nsf/ShowMyTopicsAllThreadedweb/fc46d176bae7d37685257308002aa4b5?OpenDocument )

Keep up the good work on R8!

P.S.
I'm still waiting for an exclusive nsfdb2 official beta tester t-shirt, the one with "it also runs with a i5 federated server", otherwise I will print it by myself... ;-)