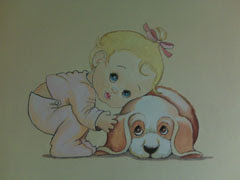 This day is ending, at last.

Since this morning I was in Rimini hospital (Rimini is a famous Italian town, home of Federico Fellini) because my little niece Matilde had surgery.


My little Matilde was born at the 24th week of pregnancy (only 6 months of normal 9 ones) , she is a premature baby, as her twin sister Anna.

Anna is getting better quickly, in fact she'll be a case study for medicine science.

Matilde was not so lucky, in fact her arterial duct (ductus arteriosus, italian: "dotto di Botallo") was still open: that duct should be closed by itself at birth, or some hours/days later. But for premature baby it does not close so easily.

Coincidentally the "ductus arteriosus" was discovered by Giulio Cesare Aranzio, an anatomical professor in the University of Bologna, in 16th century!

Doctors try to close that duct using some specific medicines first; if it does not work, they have to close it using surgery!

You can image how bad I felt when I knew that Matilde had to have surgery:
"she's too small", "she only weights only 800 grams" (28,2 ounces), "how to deal with anaesthesia?", "Will she get through all this?".
Surgery was necessary, no doubts about it.

In the afternoon a specialized surgeons team from Bologna came to Rimini to take care of my niece. I was at the hospital for twelve hours to give support to my syster and brother-in-low and to take a far look to the incubator: it seemed I was part of the "Dr. House - medical division" episode, and it was neither funny nor with a certain happy ending.

The surgery was a success. We just have to wait a few more hours to be sure everyting is really ok.

Thanks to all the people involved in the surgery and also to those friends who gave me support during the day. One battle of Matilde was won, but the war is still ongoing.

Email ThisBlogThis!Share to TwitterShare to FacebookShare to Pinterest
Tags: Personal

I'm glad the surgery was a success. I hope she starts to give her sister a run for her money now!

Our prayers are with you!
-- stw

Thanks to all for your sympathy!

Thank you for good news!!
I'll continue to pray for Matilda!!!