The following workaround was also useful when I upgraded my Quickr Connector to version 8.1.1.179.


I had troubles trying to update one specific Excel file using the Quickr Connector (version 8.1.0.103 shown on the About window, 8.1.0.117 in the Windows registry) in the Windows Explorer (no problems using a web browser...).

That error was also found on other colleagues computers :-(

When I double clicked on the file, Excel showed a pop-up window stating that it could not find the find the file in "c:\documents and settings\...omitted..path...\my file.xls".

After some unsuccessful tests, e.g. pushing a button to empty the directory for temporary Quickr local files, I found out a way to solve the problem: 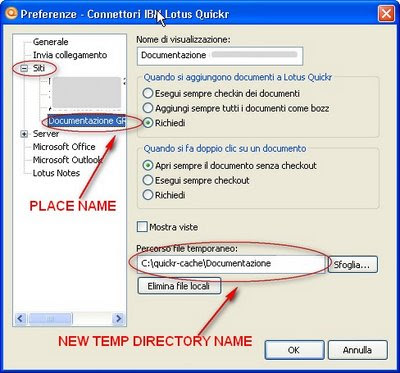 It works, although I don't like the "manual operation" (ok ok, I could write a script to update the OS registry...).

BTW, I wonder if there's any OS environment variable to instruct Quick Connector to use a specific directory path where storing local temp files...
Author Unknown at 12:46

yes, you can set a registry key to define the default path. Please have a look here.